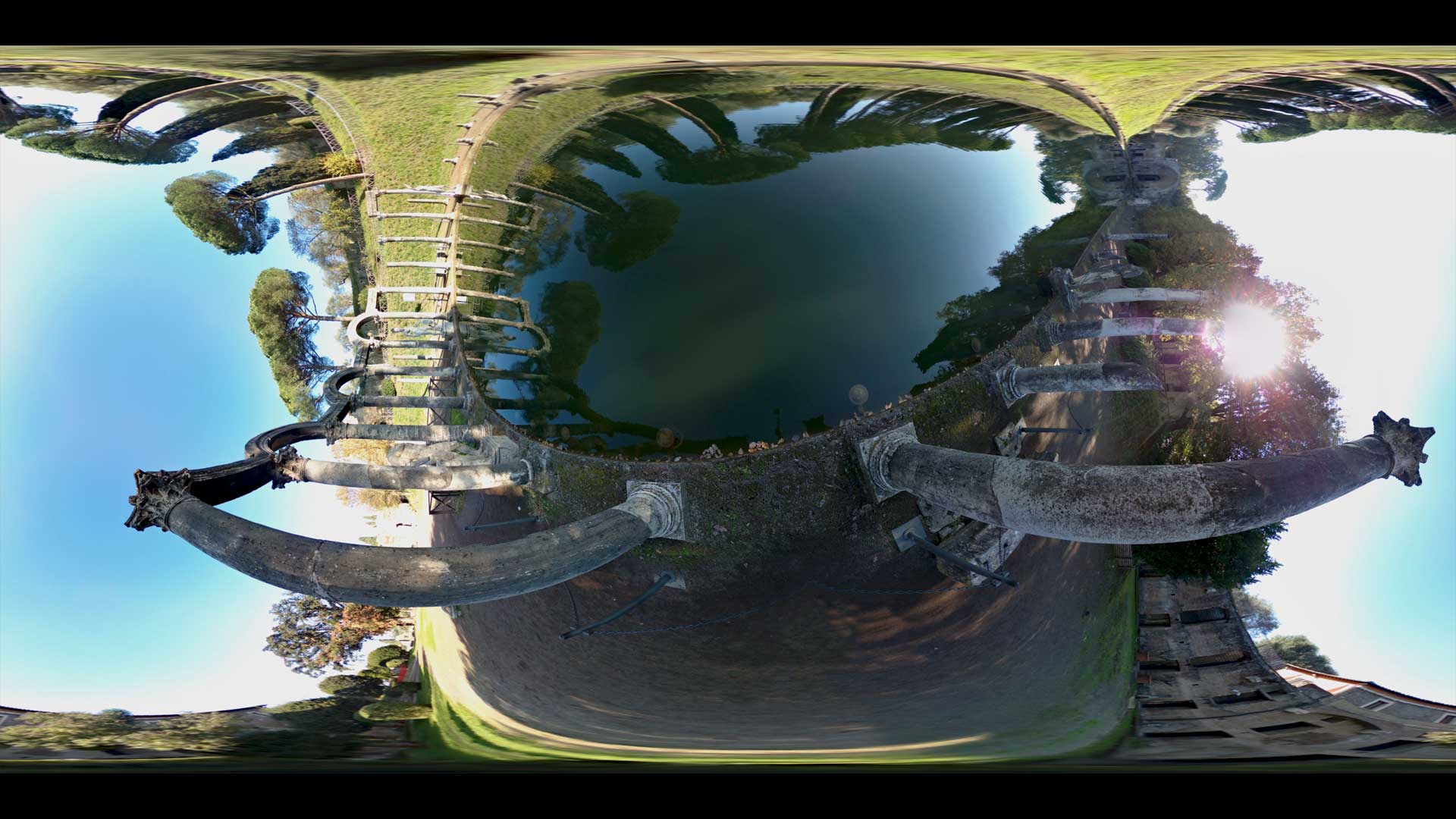 Final Cut Pro 10.4 can handle spherical (VR) 360° video with ease. It recognises footage captured by 360° cameras and spherical rigs. You can create spherical video timelines to edit 360° footage. There’s a 360° Viewer in the Final Cut interface that can be shown next to the normal view that lets you get a feel of what your audience will see when they explore the sphere of video. To create a timeline, choose File > New > Project (or press Command-N). Part of deciding what kind of timeline you want is to set the Projection Type. You can choose Normal, 360° Monoscopic or 360° Stereoscopic: For now Final Cut only works with Equirectangular 360° footage – where the rectangle of video is projected onto a rectangle in a similar way to the Earth’s spherical surface is projected onto flat maps. If Final Cut doesn’t correctly recognise the kind of media you have, you can set the 360° Mode and Stereoscopic Mode properties of footage, stills, compound clips in the browser (or inspector). You can recognise that your media is spherical: it is labelled in the browser and timeline with a spherical media icon: The simplest kind of 360° video edit involves adding a series of 360° clips to a 360° timeline, deciding on the clip order and each clip’s duration. You can do this in Final Cut Pro 10.4 and share your work to Facebook, YouTube or Vimeo. Final Cut will provide the platform-specific resolution options. It will also add the platform-specific metadata to make sure the video is recognised as a 360° video on playback.

Getting started – make sure media metadata is correct

Although Final Cut Pro 10.4 works with 360° spherical media, it might not recognise it correctly.

Even when you create a 360° project and add media from your 360° camera, you might get a result like this: The problem is that this media’s ‘360° Mode’ wasn’t worked out by Final Cut. It interpreted it as rectangular (‘flat’) media. If you select the clips in the browser, you can correct its ‘360° Mode.’ Go to the Inspector and choose the Info panel… …or scroll horizontally in the browser and change the 360° Mode to Equirectangular: Delete the clip(s) already added to your 360° project and add them again. The result should look like this: Although Final Cut doesn’t stitch footage, editors will sometimes need to fix orientation problems that can’t be fixed in consumer stitching software. For example a single shot may start with the camera in one orientation and end up with it in a different orientation. The reorient tool can also be used to fix these kinds of shots:

Just like using the Transform tool, the reorient tool modifies the properties of the clip it is applied to. This means you can apply keyframes and animate reorient properties in the inspector:

If monoscopic media (having footage for only one eye) is added to a stereoscopic timeline (for when different footage is sent to each eye to give a feeling of depth), the Reorient panel also has a Convergence property. You can set and animate this to make the footage seem closer or further away from the viewer. The default value for Distance (1.0) is rather low – it positions flat media too close to the camera. The setting shown above positions a logo further away:

Here is the 360° Transform panel in Cartesian coordinates mode: The default Distance from the camera (-1920 in a project of this size) is again low. You will find yourself using large negative values for Z position. Here the logo has been positioned so it encourages people to look up slightly

Here is the effect they have on a clip (in order of their appearance in the browser): Convert rectilinear media to spherical by turning them into Compound Clips

TIP: 360° plugins don’t work with flat media such as pictures, logos or rectilinear video. They are designed to work with spheres of video.

Here’s what you get if you apply the Gaussian Blur effect to a logo attached to the main storyline. I added my flat logo to this spherical project: I set its position in the sphere and angle by changing its spherical coordinates in the 360° Transform panel in the Inspector. The result of applying the 360° Gaussian Blur plugin:

The solution is to make the clip a piece of flat media positioned in a sphere – to use the New Compound Clip command – here invoked by Control-clicking the clip to use the context menu: Now when I apply the 360° Gaussian Blur plugin to the newly created compound clip, the result looks like this: In this case of this shot, I am visible to those who look straight down, because I held the camera on the end of a pole above my head. This is what viewers will see if they look down: I applied the 360° Patch plugin to the clip: …which copies some nearby cobblestones ‘over’ me. Many of these values were set by me clicking and dragging the on-screen controls in the viewer. I needed to rotate the patch 179° so that the pattern was close to matching the cobbles below me: Now if the viewer looks down, they’ll see something like this: The overall view of the whole sphere of video now looks like this: Note that this effect does its patching using a circular or elliptical area from elsewhere in the sphere. If you want to hide the camera rig (or operator), when you prepare to shoot a scene, bear in mind which nearby circluar piece of the sphere can be used as the source for the 360° Ptahc effect. For more advanced patching based on masked areas of the sphere, you will need to move the footage to Motion 5.

Although the text is extruded in 3D, they were created in Motion 5.4, which doesn’t yet make stereoscopic plugins, so if these titles are used in a stereoscopic 360° timeline, both eyes will get the same animation.

The rest of Final Cut’s built-in titles will work. When you apply them to a 360° timeline, turn on the 360° Transform panel in the Inspector to scale and position them correctly.

TIP: Many Final Cut Pro titles designed to animate off and on the edges of rectangular screens. Applying a mask can help. To mask titles that animate on and off the edges of the screen so that they work in 360°:

In the inspector, although the Gradient generator has gradient start and end position parameters, these are disabled because these can’t be applied in 360°.

The navigation shortcuts use the Control-Option-Command modifier keys:

Tip: When using the Reorient tool and dragging in the viewer, hold down the Shift key to constrain movement to horizontal or vertical change

Tip: There’s a new preference in the Playback panel. You can choose whether to warn if frames are dropped one the VR headset, warn after playback.

The hardware requirements to run Apple’s professional video application remain the same, but a few features depend on them running on macOS 10.13 High Sierra: HEVC and HEIF support and attaching a VR headset. If you don’t yet need these features, Final Cut Pro 10.4 will run on macOS 10.12.4. Apple’s detailed Final Cut Pro tech specs.