During the Dolby Summit* yesterday, I used the Q&A system them about the Dolby Vision workflow from iPhone 12 to Mac/PC. Here’s a summary of their answer:

You can’t import the phone’s Dolby Vision metadata into desktop applications. Yet.

Apple have said in their press release for the iPhone 12:

Dolby Vision grading is processed live and sustained during editing, whether in the Photos app or iMovie, and coming to Final Cut Pro X later this year.

Hopefully November will see an update for Final Cut that will be able to read the Dolby Vision (‘DV’) metadata. That metadata will ensure that footage looks good on Dolby Vision-compatible HDR displays. 80% of TVs sold in Europe have Dolby Vision.

The Dolby Vision mastering process includes automatically generating metadata for your video so that it displays well on SDR displays – such as older phones, TVs and most computers. Graders say that this automated process works for 95% of shots. The process creates colour and brightness metadata to each shot in your programme. The art of the colour grader is going through those shots, finding the 5% that need to be changed for SDR viewing and making the right changes.

To be ‘Dolby Vision compatible’ I expect Final Cut will be able to display the light and colour metadata generated by the iPhone camera app when footage is captured. It should also generate the metadata for edited programmes so that it can be modified in colour grading applications. It would be a bonus if that metadata could be changed in Final Cut too.

Apple have a December 2019 white paper on the subject: ‘HDR and Wide Color Gamut in Final Cut Pro X’. In your timeline’s Project Properties, set the colour space to Rec.2020 PQ:

Choose this option if you want to create an HDR movie with the Rec. 2020 color space and PQ transfer function (Rec. 2100 standard). This format can be used for Dolby Vision and HDR10 mastering at a later stage.

So for now, although the footage from the iPhone 12 / 12 Pro is HLG, a PQ timeline is better if you want grading applications to be able to make the most of what was captured.

I’ll update this post once Final Cut is updated.

*Dolby Summit was a streamed conference for those who make TV, films, music and video games that use Dolby technologies such as Dolby Vision for video and Dolby Atmos for audio.

Read more
BlogAll you need to know about Final Cut Pro 10.4.9 – improvements in many areasTuesday, August 25 2020 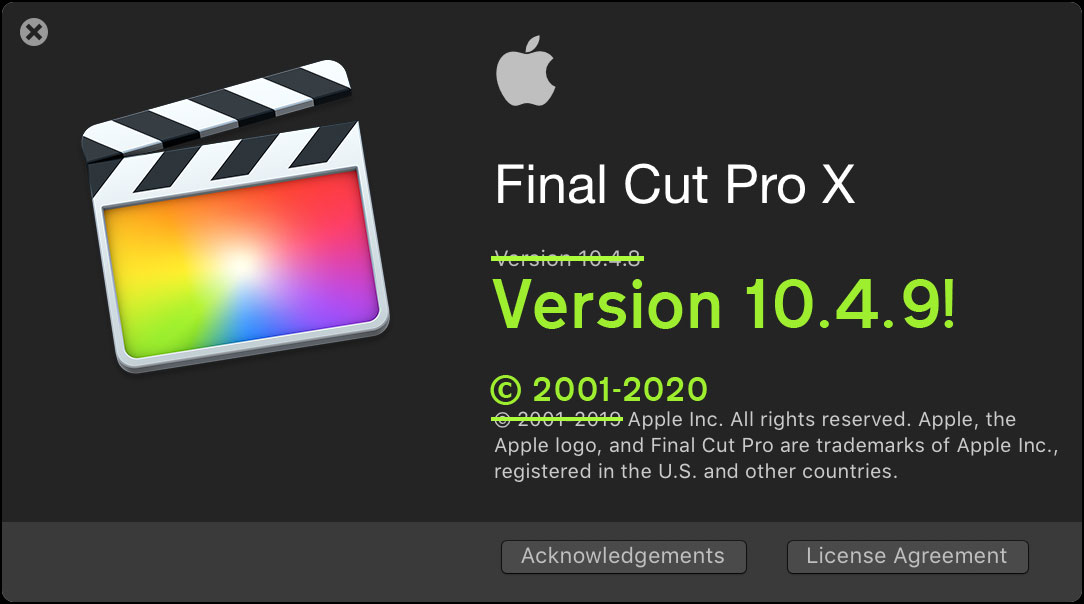 The current Apple policy is to have no roadmap for future plans or ongoing public promotion of Final Cut Pro. This means what features are prioritised in updates give us hints on how they think about Final Cut and who they think it is for.

There are improvements for…

Apple is telling us with this release that they want to please almost every kind of Final Cut user you might imagine. From feature film editors and post supervisors up to those starting out in multiple channels of social media.

This isn’t the ‘everything I want’ update to 10.5 (or even 11) that some have been hoping for since the last big update in Autumn 2018. The good news is the majority of the new features will change many Final Cut user’s lives for the better.

I’ll update this page with new information as I find it.

All three applications work with macOS Mojave (10.14.6) and newer.

There is a 20 minute video from Felipe Baez on the workflow improvements in Final Cut:

Another is a 40 minute video from Ripple Training, who make training courses for Final Cut Pro, Motion, Compressor and DaVinci Resolve:

Here is their video on new features in Motion 5.4.6:

Frame.io have updated their workflow extension:

We’ve updated our #FinalCutPro X Workflow Extension. Drag clips from the https://t.co/maIBcRSC2a extension directly into Final Cut, and Final Cut will download them in the background. #fcpx pic.twitter.com/fnfs0sVF3S

Before you apply the updates

The 10.4.9 update changes the format of Final Cut libraries, so best back up all libraries made with 10.4.8 and also compress (using the Archive command in the Finder) and back up the Final Cut 10.4.8, Motion 5.4.5 and Compressor 4.4.6 too. Apple’s support document on this.

When you are ready, use the ‘App Store…’ command in the Apple menu to see if the updates are available.

Once you can write plug-ins for Final Cut Pro in Swift, making tools to extend Final Cut will be a worthwhile project for those learning programming.

I like to call the tools I make for Final Cut ‘plug-ins’ because from a user point of view they are small pieces of code that add features to Final Cut Pro. I don’t use traditional programming to make them. I use Motion, Apple’s $49 real-time motion graphics application. I combine the features and filters of Motion to make templates for Final Cut Pro. If I can’t do something in Motion, I can’t make it happen in Final Cut Pro.

What developers like to call ‘real’ plug-ins for applications are made using Xcode and written in Objective-C. They add new features to Motion. These new features are made available in Final Cut using a Motion template.

The software development kit that developers use to build these sort of plug-ins is called FxPlug.

A new version of FxPlug – version 4 – was introduced in October 2019 last year.

FxPlug 4 introduces fully ‘out-of-process‘ FxPlug plug-ins, which have no component that runs inside of the host application process. Out-of-process plug-ins provide improved security for end users and allow plug-in developers the freedom to choose from a variety of rendering technologies, such as OpenGL, Core Graphics, Core Image, or Metal to develop unique plug-ins that include on-screen controls and custom user interface elements—all running seamlessly in the host application. Plug-in developers can choose to implement in either Swift or Objective-C.

FxPlug 4 means developers can use Metal for rendering for the first time and can be written using Apple’s Swift programming language.

Version 4 is good news for developers who want to make new plug-ins that faster (that render using Metal) and more secure (because they are more reliable, so need less support).

In recent years, Apple has focussed on helping educators teach programming using their Swift language. They provide all sorts of resources and tools to advance the cause of development worldwide.

One of the tough parts of teaching programming is to find simple enough projects that are based on small parts of a programming language, yet advanced enough to be inspirational to students.

There’s a big leap from getting your computer to display ‘hello world’ to getting it do something that someone would find useful on a day to day basis. The tough part is including all the elements that make a program work as a Mac, iPad or iPhone application. A tool to use every once in a while or to share with others.

The advantage of making a plug-in is that the ‘host’ application does a lot of the work to make the tool useful. It provides menus, windows, media, timelines and user interface elements.

Motion as a plug-in development playground

That’s why I hope that to establish this new version of the FxPlug SDK, Apple will develop educational resources so that new programmers will be able to learn Swift programming by making plug-ins for Motion. Plug-ins that add features to Motion to make templates for Final Cut Pro.

New developers would be even more encouraged to learn if new versions of iMovie for Mac, iPad and iPhone are able to use Motion templates that include FxPlug plug-ins. Having a potential audience (or market) of tens of millions of editors would be a big incentive to learn!

Many in the Final Cut Pro and Motion community (bubble?) bemoan the fact that Apple aren’t out there promoting our favourite applications. They don’t have stands at trade fairs and they don’t seem to put on professional events any more – not even in Hollywood.

Alongside many, I missed that Apple is doing publicly doing something for their video applications. There is an event at the end of this month in Los Angeles: Vlog University with iJustine:

Vlog University is a 2-day training conference designed to provide professional training for those interested in building or enhancing their online channels.

What has this to do with Apple?

Although this isn’t the ‘Force Hollywood to use Final Cut for all productions’ event we might like, it shows that Apple is looking outwards instead of keeping the chocolate factory doors closed between software updates.

If this event turns out to be a success from Apple’s point of view, I wonder if will pave the way for more industry-specific Final Cut Pro events. For the same audience in other countries, and for different audiences in the USA.

The advantage of starting with social media folk is that they know that they don’t know all there is to know. The trick with other markets is appealing to people who think they know enough to do their work. Maybe if you have the right idea for an event, Apple will support you.

Business Video University anyone? Documentary Production University? Let’s hope events like these will be coming to a country near you soon!

Here is how to make sure Motion displays rectangles without soft edges. By default they are displayed with soft edges.