Here’s a video from Alex Lindsay’s Office Hours detailing the Final Cut Pro-based workflow of ‘Q: Into the Storm’ – a six part documentary shown on HBO.

If you make a custom plugin for Final Cut Pro using Apple Motion 5, your customer might ask for an update with bug fixes and new features. There might be a problem after you deliver the second version. What happens if they open a timeline that used the first version and it is no longer on the system – having been replaced by the second version? Old projects will report that the plugin is missing, or not work the way they used to.

There is a way of deprecating a Motion template. To tell Final Cut that it can be used in previous projects but can’t be applied in new projects.

From ‘Preparing Plug-ins for Use in Final Cut Pro’ on the Apple Developer website:

When you update an existing plug-in, you may also need to deprecate the older version of the Motion template. A deprecated template is considered obsolete and does not appear in the effects browser in Motion, but it will still be applied in projects that previously used it.

To deprecate a template, open the Motion XML document and take the current value of the <flags> element (a child of the <template> element) and perform a bitwise OR operation with the value 0x2. For example, if the value of <flags> was previously 1, it would now be 3:

This means to deprecate a template you made in Motion, open it with a text editor and edit the <template> section so that the value of <flags> is 3.

To add your own <template> section, in your text editor, search for <build> and add this before it:

When collaborating with other editors, sometimes there can be problems getting their title, effect, transition or generator plugins working on your system.

Motion 5 can’t save its documents so as to be compatible with older versions of Motion or Final Cut. Fortunately Motion stores its documents in XML format (known as OZML) that can be opened, edited and saved using any text editing application.

This means you can fix the problem of Motion templates newer than your version of Final Cut by making a simple change to the text in the template.

This method is useful if you are building Apple Motion 5 plugins for a client whose Macs are using an older version of Final Cut.

Motion 5.6 templates start with this text:

If you want those templates to work in Final Cut Pro 10.4.10 (for those who want their Mac to remain running macOS Mojave 10.14), you need to use a text editor – such as TextEdit – to change the first few lines so it looks as if it was saved by the version of Motion available when Final Cut 10.4.10 was introduced: 5.4.7.

So which numbers for ozml version and displayversion work with the version of Final Cut you have?

You can find out in this table that you can read on fcpxtemplates.com: 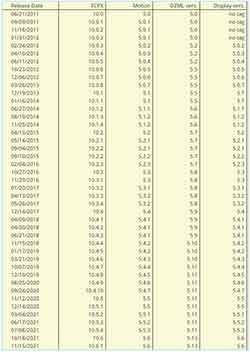 Use the second column to look up the version of Final Cut Pro you want the template to work with. Use the fourth and fifth columns to see which values of ozml version and displayversion to use.

As well as a post on this subject, fcpxtemplates has generously made a Motion Template Backdater web service that can make the required text change to Motion templates. Upload the title (.moti), transition (.motr), effect (.moef) or generator (.motn) and pick which version you want to backdate the template to from the popup menu.

Increasing the audience for your Motion templates

You can edit the plugin so it looks like it was generated using an older version of Motion than the one associated with the Final Cut Pro you have if you want to make sure people on older versions of Final Cut will be able to use your template.

So, if your template doesn’t use features introduced to Motion since version 10.4 of Final Cut, you can use these first few lines:

…a change which Apple’s TextEdit application will sometimes automatically make.

Either go to TextEdit Preferences and uncheck ‘Smart quotes’ or copy one of these lines depending on which version of Final Cut you are using:

This excerpt from Office Hours is a short discussion about Apple Motion 5. I asked Alex Lindsay what features he would like to see in Motion that would appeal to those running live streaming events ([1:25:28] into this YouTube video).

Here is a rundown of the new features added to Apple Motion 5 since 2016.

Reading is Fundamental! is an application by Intelligent Assistance that adds a versatile document viewer to the Final Cut Pro user interface.

Sometimes a new project or an edit task uses a brief made up of different kinds of documents. Plain text emails, spreadsheets, presentations. With current Macs it is possible to have the apps that can show these documents open at the same time as Final Cut, but having to continually switch between different applications with different user interfaces can put me off my creative flow.

The Reading is Fundamental! window can hold multiple documents of different types which you can switch between using left and right arrows at the top of the window.

Once you run the application on the same Mac as Final Cut Pro, it adds a button to the Final Cut toolbar so you can bring up its window with a click. Once you have positioned the window to your satisfaction, you can use the Window > Workspaces > Save Workspace As… command to recall its position relative to the other panels of the Final Cut UI.

Its floating window means I can position it wherever I want – so that both the document I need to see and the Final Cut tools I need to work with are visible at the same time.

…and if you need to edit any of the documents it is showing, it can open it in the default app for the document type.

Editors know that staying in ‘the flow’ is vital. Reading is Fundamental! helps Final Cut users cruise through creative flows or glide through repetitive processes.

It requires macOS 10.15 Catalina and is available from the Mac App Store.