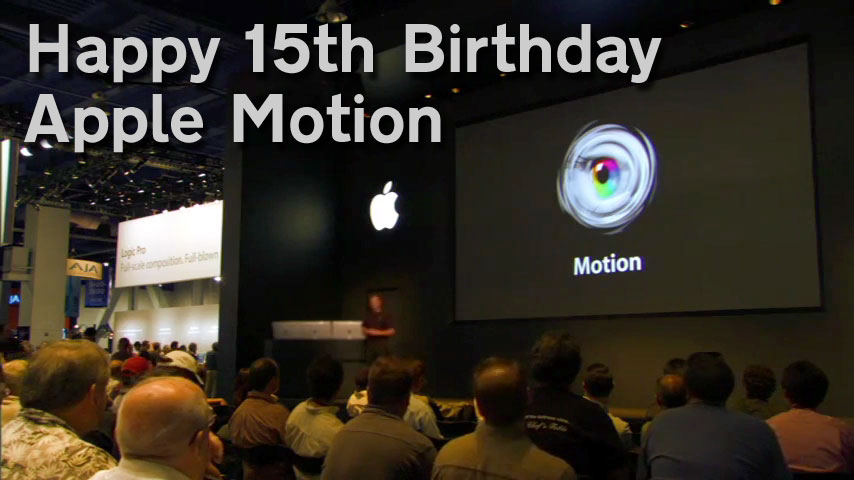 Motion was first publicly previewed in 2004 at NAB in Las Vegas and Apple Expo in Paris. Here is PhotoJoseph’s repost of Apple’s videos of those demos:

The amazing thing about many features shown here is that even 15 years on, it would be hard for today’s other animation applications to match what Motion users could do in 2004. Although the final animations can now be exported into tools like Blackmagic Fusion and Adobe After Effects, they still can’t match the real-time responsiveness of Motion (1)’s user interface.

Since 2004 animations in Motion can modified in complex ways in real time while the animation is playing. No stopping to change settings, waiting for a render, then playing back a lower-resolution preview. Motion users play with ideas while users of other applications make plans of what they will try next.

Although it is possible to make animations complex enough that slow down Motion’s UI responsiveness, Apple’s focus has made sure it remains a real-time animation application.

They have done this by saying ‘no’ to new features that make the UI less responsive. Features that would allow motion graphics designers who also use After Effects or node-based compositing systems to apply methods they know from these other applications.

Too late to beat Adobe After Effects

When Motion was introduced in 2004, After Effects was already the ‘Avid Media Composer’ of motion graphics and video effects. There were already established industry workflows using After Effects – few users saw a reason to switch. They saw that it was a lot faster, but it also seemed strange compared with what they were used to. It didn’t offer enough to make up for its steep learning curve.

Although Apple regularly improved Motion during the rest of the 2000s, it didn’t capture the imagination of a significant proportion of motion graphics designers. It was eventually included in the Final Cut Studio bundle, made up of Final Cut Pro, Soundtrack Pro and DVD Studio Pro and more. Even when hundreds of thousands of users got Motion for ‘free,’ few could justify the time needed to ‘get’ it.

Despite versions 1, 2, 3 and 4 never really breaking out, Apple stuck with Motion. They have kept developing it because Motion became a vital element in the 2011 reboot of Final Cut Pro: version 10.

The reason why Final Cut Pro is the fastest video editing application is that since version 10.0, there has been a whole copy of Apple Motion 5 built into it. Motion’s real-time animation system is now Final Cut’s real-time rendering system. Rendering changing scale, colour, position and rotation of a video clip is now slower than a clip that only has one parameter changing.

Final Cut also benefits from Motion because it is through Motion that nearly all of Final Cut’s built-in real time effects, titles, transitions and graphics are implemented. Many feature updates to Final Cut insect 2011 are accompanied by a new version of Motion.

Lastly, third-parties (like me) can use Motion to create plugins that improve Final Cut. As well as a huge paid plugin ecosystem, there are over 1,000 free plugins for Final Cut.

The other side of Motion being at the core of Apple’s Final Cut development is that Motion is mainly improved to support Final Cut. Since 2011 there have been few improvements designed to benefit those who use Motion to make motion graphics.

With Motion there is the classic chicken and egg situation: designers don’t pick up the tool because it hasn’t improved and Apple can’t justify making it better for those designers because few of them are picking it up.

I hope Apple will soon act as if they see Motion as more than a Final Cut developer tool.

Apple Motion has a future as long as Apple’s Final Cut Pro has a future. I’m sure Final Cut will be around for many years. Apple’s video Applications team want it to break though the 20th century timeline barrier as typified by Avid Media Composer and continually being popularised by Adobe Premiere. That means years more improvements for regular people upgrading from iMovie and to attract established post-production people currently sticking with old systems.

Motion evolution – and hopefully revolution – will be at the heart of Apple video applications for years to come. I’m looking forward to it!

Apple introduces a tiny hint of collaboration to iMovie for iOS