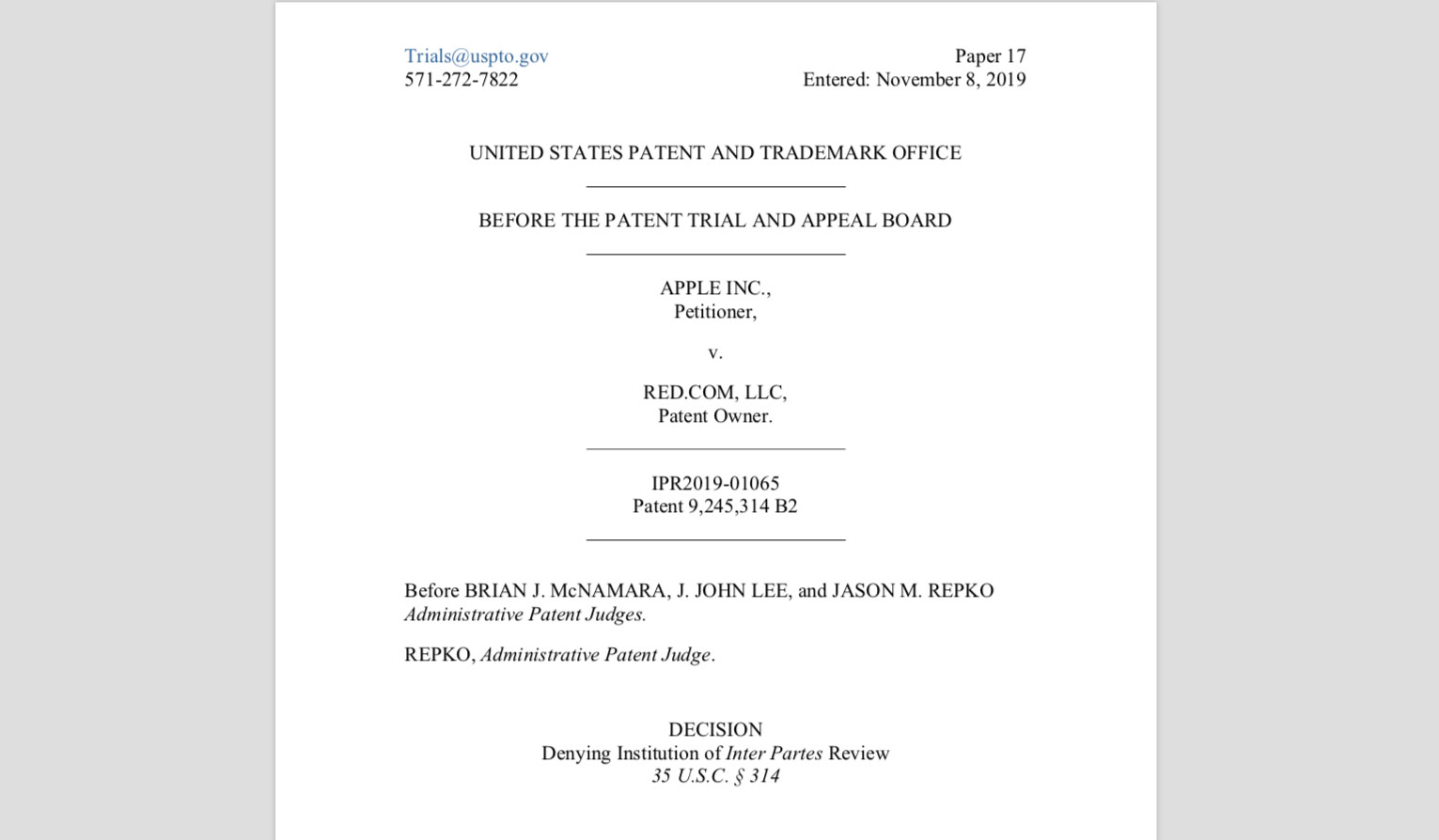 Apple has hit a hurdle in clearing the way for high-end camera makers to adopt built-in encoding of their ProRes RAW codec.

Apple wanted to appeal the validity of RED.COM’s patent that allows sensor data to be encoded in specific ways in cameras. The existence of this patent makes it harder for Apple to convince camera companies to include Apple’s ProRes RAW codec recording in their offerings. They might have to apply to RED for a patent license. RED might charge too much for one of their competitors to for ProRes RAW recording to make economic sense.

An ‘Institution of Inter Partes Review’ of RED.COM’s patent on RAW video capture in high-end professional video cameras was denied by the Patent Office according to a document I found on their website* ProRes RAW has a superior method of storing the actual sensor data as captured by the camera for use in high-end post production. RED’s method compresses the information coming from the camera sensor to make it easier to store and decode on computers:

[The patent] applies mathematically lossy compression to the data “in a way that provides a visually lossless output.”

REDCODE – the system that implements RED’s patent – was designed to work on 10+ year old computer technology. Although the result may be visually lossless, the result doesn’t include all information captured by the camera – some of which might be useful in the postproduction process. Modern hardware and software can now handle the actual sensor data (known as RAW data) in real time – in Apple’s Final Cut Pro running on recent Mac computers.

Not yet invalidating this patent might also be a problem for Apple themselves if they want to introduce RAW video recording in the iPhone or iPad.

The application by Apple to the Patent Office was made public by Andrew Reid of the EOSHD site in August when RED responded to Apple:

In Apple’s attempt to overturn RED’s claims over visually lossless compressed raw video, the US Patent Office has published documents submitted by RED. These explain their side of the story with particular regard to REDCODE.

If RED can continue to prove that the approach to their codec was novel, RED will win and Apple will have to compensate RED or make a deal in order to sell ProRes RAW in our devices and cameras, such as the Nikon Z6.

Apple did not ‘demonstrate a reasonable likelihood of prevailing’

The Patent Office decision says that it would be unlikely for a review to succeed invaliding the appeal.

To institute an inter partes review, we must determine “that there is a reasonable likelihood that the petitioner would prevail with respect to at least 1 of the claims challenged in the petition.” 35 U.S.C. § 314(a). For the reasons discussed below, Petitioner has not shown a reasonable likelihood that it would prevail in showing that any challenged claim is unpatentable. Thus, we deny the Petition and do not institute an inter partes review.

Apple (the Petitioner) weren’t specific enough for this claim (my emphasis):

In this case the comparison would be between ProRes RAW – “original (never compressed) image data” and REDCODE – “visually lossless.”

Apple’s lawyers also seemed to fail when asserting that RED.COM’s patent had not added anything to a combination of two previous inventions. If combining two previous patents produced the result in RED’s patent, then the idea would be deemed ‘obvious’ and not patentable. However:

In sum, Petitioner’s obviousness challenge is unclear and incomplete.

It seems that this decision by the US Patent Office is more about the application for the appeal not being valid than the actual appeal itself. They are telling Apple’s lawyers that they need to make a more precise claim of validity if the patent review is to take place.

I expect Apple will try again. I’m looking forward to seeing what happens next.