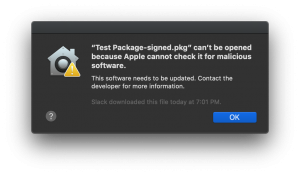 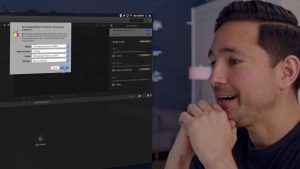 If you are tempted to apply very new macOS updates, it is a good idea to have ‘last known good’ macOS installers to hand. They also help when you need to recover from serious Mac problems.

Even though there is a new version of macOS available, the High Sierra installer is still available from the Mac App Store.

Blackmagic RAW has been in development for years

We started on this long before we heard Apple was developing a post-focused RAW codec.

There is no margin in giving away free post software. We are a post production hardware company that makes cameras, not a computer maker.

Because the processor intensive partial de-mosaic is done by the camera hardware, software such as DaVinci Resolve doesn’t have to do as much work decoding the files

We want our software to be cross-platform. We need to make sure Resolve works on operating systems and hardware that might not be as good at working with media. Popular hardware and OS combinations aren’t powerful enough to work with ProRes RAW

Blackmagic RAW is much more than a simple RAW container format. Its intelligent design actually understands the camera and the sensor. This means the image data, along with the unique characteristics of the image sensor

Despite cameras not having huge differences in sensor and glass, we think Apple ProRes RAW doesn’t include enough metadata to capture their individual characteristics.

“Send me a Blackmagic”

Blackmagic Design is up against one of the biggest brands in post production. As much as people say “Can I look at it on the Avid,” they also say “Can you send me a ProRes.” It makes post-production adjacent people in TV and film feel like they are ‘in with’ the post process – even if those brands are all they know. They would be happy if you showed them you work on a Adobe Premiere Pro CC timeline, or if you send them an H.265 MP4.

I’ll be interested to see if Blackmagic gets people switching from Apple and Avid codecs for post. I’m looking forward to seeing how well ProRes RAW converts to Blackmagic RAW.

According to fcp.co, the Blackmagic’s beta codec and sample media don’t work in Final Cut Pro X, but there’s no business reason why they shouldn’t. If Final Cut users liked it, Blackmagic could sell more cameras.

As regards Apple’s ProRes RAW working in Resolve, I’m sure they would like that, but they also like other applications being used as off-line editors while the online -the last 5% – is done in Resolve (if needed).

Overall: A reaction, not an instigation.

Read more
BlogAdobe Premiere can now edit IMF, wither Final Cut?Thursday, September 13 2018
Third-parties who develop Interoperable Master Format workflow tools don’t seem to believe that Final Cut Pro X is relevant.
At the end of many high-end productions comes expressing your feature film or TV show as IMF – a SMPTE standard for providing a single, interchangeable master file format and structure for the distribution of content. Each IMF database can be used to generate deliverables for multiple playback systems such as different projectors, sound systems, TV standards, Blu-Rays, spoken languages, subtitles and more.
Marquise Technologies is a Swiss company that have been involved in developing IMF. They have many high-end tools. Yesterday they launched an IMF import system for Adobe Premiere CC:

With the growing adoption of the Interoperable Master Format for content exchange it has become increasingly important for professional editing solutions to support this standard. Marquise Technologies and Adobe have collaborated to enable Adobe Premiere Pro CC to import IMF packages, including multiple CPLs packages. Editors are now able to review and process IMF Application #2 and #2e (Studio Profile) content.

The irony is that Final Cut Pro X is much more suited to thinking about media as a database that can be expressed multiple ways. Better than any track-based NLE.
What client need would convince IMF ecosystem developers to make tools that work with Final Cut?
Read more
BlogiPad Pro wish: eGPU for MacsTuesday, September 11 2018

Should Apple make an external display for Macs? One with a built-in GPU? How about the 2018 iPad Pros?

Apple’s September 2018 iPhone launch event didn’t mention the iPad Pro range. What might the future hold? The Apple rumour industry predicts a new look – inspired by the iPhone: smaller bezels, antenna lines around the edge. The iPad Smart connector may move to a different edge and the home button is removed to allow for Face ID to replace Touch ID.

If Apple start promoting another use for iPad Pros – as Pro accessories for Macs – then the iPad update may come in an event also promoting new Macs.

Many Mac users also have iPads. What if new iPads could improve Macs? My wish: that new iPads can act as external screens and eGPUs for Macs. This would be useful for MacBook Pro users who need more screen space and more power when on the move. The iPad Pro has a 2732 by 2048 pixel wide colour display. Its GPU can update the display 120 times a second. That graphics power could be useful for high-end applications.

Mac minis with a Thunderbolt 3-powered USB C connectors could get extra processing power and a display. For those who would like to manage multiple Mac minis, having a handy external screen to move from device to device would be very useful.

As many professional applications make extensive use of GPU processing, any help they can get from adjacent devices would be useful. I don’t know if the Lightning port on iOS devices can connect at Thunderbolt 3 bandwidth. Maybe the iPad Pro Smart Connector can.

Some professional applications could even add features that work on connected touchscreens like iPads and iPhones. For example a Lumberjack System-like keyword palette might be use for Final Cut Pro X.

If Apple did this, it would be very likely that I would seriously consider replacing my current iPad 2 with a new iPad Pro!

I think it would be a good move for the Motion playback system to be made available in macOS and iOS. At the moment, almost all the plugins in Final Cut Pro templates are made in Motion 5 – Apple’s motion graphics application. Motion can make effect, transition, title and generator plugins for Final Cut. If Motion’s features aren’t enough for plugin developers to make the plugins they want, they call FxPlug plugins in Motion to add features.

When Motion was first introduced, QuickTime could play back Motion files in any application. That meant you could use Motion documents as elements in After Effects projects. The current frame would be rendered very quickly in the GPU any time AE needed it. In many cases it was quicker to make complex animations in Motion and use them as layers in After Effects.

Imagine if that feature returned.

That would mean any macOS application would be able to use Motion templates. They are stored in the Motion Templates folder – not a ‘Final Cut Pro X plugins’ folder. If a plugin needs FxPlug extensions, those are stored in a standard OS folder. Timelines that use Motion templates would then be able to transfer from and to iMovie, Final Cut Pro X, Logic Pro X, Blackmagic DaVinci Resolve, Fusion, Adobe Premiere, After Effects, Nuke and more on the Mac.

Of course third-party developers would need to implement compatibility with Motion plugins. Compatibility that would not be cross-platform. Workflows that would not transfer to Windows and Linux: ‘Sorry, our render farm can’t work with your timelines – they use Motion templates. Our service isn’t Mac-based.’

Also if iOS supported Motion templates, timelines could be moved to and from iMovie, Clips and any NLE running on iPhones and iPads. Not to Windows- and Android-based mobile devices.

An observation: If you attach Motion templates to emails in Apple Mail, once the email is sent, the icons are replaced by placeholders to show that these are video files that can’t be played in the current application: Could this be in preparation for when Motion templates can be played in applications other than Final Cut Pro X? I hope so.

For a limited time my two commercial plugin packs are on sale. They are available at 20% off.

This pack of 120 transitions can be used to animate whole video clips, images, titles and logos on and off the screen. No need to use keyframes. Choose a few settings and your animation is done. Need to change the timing? Simply change the duration of the transition by dragging in the Final Cut Pro X timeline. No need to change the values and times for keyframes of multiple parameters.

Alex4D Animation Transitions also works in any aspect ratio. As well as traditional 16:9, they can be used to make super-wide animations in a 48:9 aspect ratio or wider. They can also add animation to square and vertical videos used in social media:

Find out more at alex4d.com/animationtransitions

This pack of effects includes three free plugins that speed up 360° video production.

See the wide range of effects over at alex4d.com/360effects